Being an adult occasionally sucks–like the fact you no longer get off (at least in the Commonwealth of Virginia) from mid-June until Labor Day weekend. 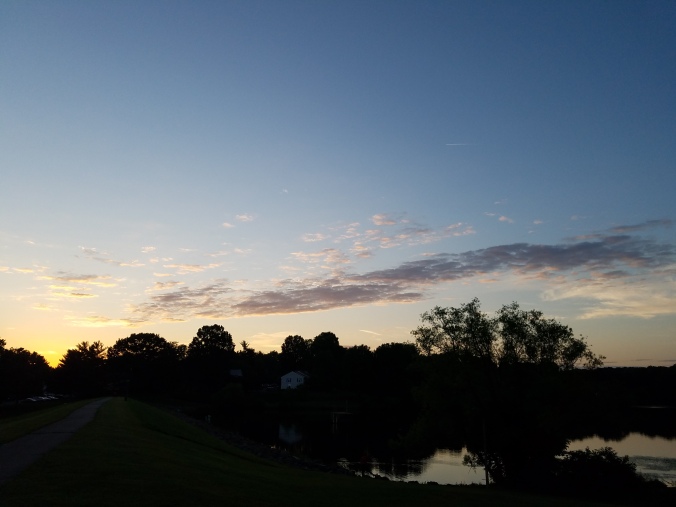 Sunset at Summer Solstice, over the lake

My mom was a high school librarian and most summers, we just had a stay-cation. The first two weeks were spent at my grandmother’s: playing, reading my uncle’s comics, napping, watching tv. Once or twice, Mom would bring us in with her to help sort books and shelve.

I’m sure you’re thinking: “what horrific child labor” except, I’m a bit OC (not OCD, it’s just a personality trait, not a disorder for me, I’d never want to belittle the struggles someone with true OCD goes through). Sorting the books, seeing what was available, getting the shelves lined up just right? That was just my sort of thing! (At least for a day or so). Also, Mom’s school had computers, so I’d email my dad, who was living in Texas at the time.

Once summer started for real, our days were more relaxed. After sleeping in, it would be time for breakfast. As a child, I was a very slow eater,[0] so ate my cereal dry with several spoonfuls of sugar added. Mom didn’t get the super sweet cereals, mostly raisin bran, cornflakes, and rice crispies. I know, it seems a travesty to most people, to eat rice crispies without milk, but I ate so very slowly, it would be dissolved by the time I got three spoonfuls in, and then there was no way you could get me to eat that.

We’d do some chores. My sister and I started changing sheets when we were 3 years old. We wanted to be helpful. NEVER MAKE THAT MISTAKE. So, changing sheets every other week, picking up so mom could run the vacuum, setting the table, clearing the table, that sort of thing. Outside, mom would have us fill brown grocery bags full of pine cones, so she could mow the lawn without running them over.

Then, most of the day was spent playing or reading with my sister and the next-door-neighbor girl, S, who was 2 weeks older. When we were 8 or 9, we got a Nintendo. I still remember my mother sending us out to play outside, telling us to turn up the window AC unit on our way out, as she turned on the Nintendo. So, we’d go play on the swing set, wander in the woods behind our houses, play on our bikes, or just wander around and make up stories.

By the time we came in, she’d be making dinner and let us know that the Nintendo had been on for 2 hours, so it needed to rest. After dinner was bath, then bedtime. I’d fall asleep to the sounds of The Adventures of Link, or Gauntlet floating down the hallway.

How were your summers, growing up?

1 – What can I say? I wasn’t hungry. I’d probably snacked on toast with butter and jelly.

Morgan Hazelwood (she/her) is a fantasy novelist who blogs and vlogs writing tips and writerly musings. She likes taking pictures of the sky, reading a good book, and ambiverting from her living room. She's also a voice for the fairy-tale audio drama: Anansi Storytime and its sister podcast: Legendsmith. She's been known to procrati-clean her whole house and alphabetize other people's bookshelves.