NOTE: If you submit your query to me (morgan.s.hazelwood@gmail.com), and you are selected for inclusion, I will give you a high-level review, in-line feedback, and my own draft of your query. If this is your query, feel free to use or ignore as much of the advice and suggestions as you wish.

[Disclaimer: Any query selected for the page will be posted on this website for perpetuity. I am an amateur with no actual accepted queries and a good number of form rejections. This does not guarantee an agent or even an amazing query, just a new take by someone who’s read The Query Shark archives twice and enjoys playing with queries.]

The story sounds action-packed, with fun characters and careful attention to word choices.

The query is 491 words long — which is about 191 words longer than any query should plan to be.

Places to cut words? The query tells more of the story than we need and explains how the novel differs from others in its genre. Don’t spell it out for the agent, the story should give your explanation for you!

[my comments are in blue/italics/brackets]

Whether you choose, A VISIT FROM REVENGE, or not, I look forward to following you, and Crooked Lane Books, on Twitter. Thank you. [not needed]

Finally released after serving a five-year sentence for a crime he didn’t commit, Timothy Matthews is out for revenge. His target? The woman who set him up … his ex-wife, Alice. [Good, solid start. If a little predictable for this genre.]

But, Timothy’s efforts for payback don’t come easily. Bank accounts wiped clean, no place to live, and no one to turn to, Timothy finds himself making allies among the homeless in a city terrorized by the serial home invader, “The Charlotte Webbist.” A born sadist, Charlotte’s fetish isn’t satisfied by rape, or murder, or physically harming his victims, yet they would choose all of these over his terrifying calling card. [give details! Vagueness means this could be 12 other stories.]

When life throws Timothy a twist that makes him reconsider getting revenge on his ex-wife, he attempts to clear his name. [What? This is 2 sentences and a little clunky.] Until Timothy learns that the Charlotte Webbist is living among the junkies [how? Does The Charlotte attack him?], and he has skyrocketed to the top of the Charlotte’s hit-list. When it comes to revenge, Timothy is no longer the visitor, but the visited. [I know you’re trying to make the title pop here, but it feels a little forced.]

A VISIT FROM REVENGE is a suspense novel that runs about 89,000 words and is similar in tone to the gritty work of Dennis Lehane while featuring a Hannibal Lecter-level antagonist. I subtracted my bio to use your valuable time on what separates my Suspense/Thriller [pick one. Google suggests the protagonist is in danger from the get-go in a thriller. So, I’d suggest suspense.] from the usual trope of, “Detective must find killer/rapist/kidnapper before he strikes again.” My story centers on the homeless and junkies. My research revealed some sad truth, which is when crimes are committed against them, if the police do not catch the perpetrator immediately, there is very little they can do to help. There’s no phone for the police to reach the Homeless if they have a lead or more questions, no address to send court papers so they can take part in a trial against the person who did them wrong, and a homeless criminal in general is tough to find when they have no address, job, or ties to the community. If my characters have a problem, they must deal with it themselves. They must do their own searching, their own investigating, and sometimes, collect their own justice. [Very eloquent, but the query letter isn’t the place for this.]

What I will say about myself is A) I have thicker-than-thick skin. B) I embrace guidance. C) I will chop my manuscript to pieces if need be. D) I bust my ass when it comes to writing. I have a self-published novel and novella, (The Never-Never Door and Joe’s Redemption) with a loyal fan base. [Only mention if you have a good sized following and/or your publicity is good.] Thank you very much for your time, and I look forward to hearing from you. [the QueryShark finds this default line presumptuous. Many agents don’t care, but why antagonize the ones that do?]

After serving a five-year sentence for a crime he didn’t commit, Timothy Matthews is out for revenge. His target? The woman who set him up … his ex-wife, Alice.

With his bank accounts wiped clean and no one to turn to, Timothy finds himself making allies among the homeless. But revenge is hard when you have no resources. When Timothy’s given the chance to clear his name, he puts his revenge plans on hold.

Then, someone [does a thing similar to Charlotte’s calling card]. One step shy of the serial home invader, “The Charlotte Webbist’s” terrifying calling card. If Timothy can’t figure out which of his fellow street ‘neighbors’ is The Charlotte, he’s going to be the next victim.

A VISIT FROM REVENGE is an 89,000-word suspense novel that should appeal to fans of Dennis Lehane. A VISIT FROM REVENGE emphasizes the difficulties the police have in protecting the homeless, which can lead them to do their own investigating, and sometimes, collect their own justice. [If you still want to explain your take to the agent, here’s a brief description of the issues you wanted to address.]

I write from [city/region/somewhere]. I’m the self-published author of the novel, The Never-Never Door and the novella Joe’s Redemption.

Thank you for your time and consideration.

Now, not all of my feedback is going to work for the queryist. They know their story best, but hopefully, it puts them on the right path!

And for the rest of you out there?
Best of luck in the query trenches! 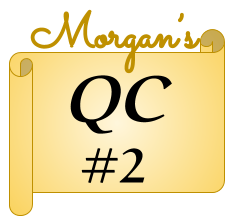 Morgan Hazelwood (she/her) is a fantasy novelist who blogs and vlogs writing tips and writerly musings. She likes taking pictures of the sky, reading a good book, and ambiverting from her living room. She's also a voice for the fairy-tale audio drama: Anansi Storytime and its sister podcast: Legendsmith. She's been known to procrati-clean her whole house and alphabetize other people's bookshelves. View all posts by Morgan Hazelwood

As of 8/9/2022, I am part of the Amazon Affiliate program. Buy the books you like and help keep this site ad-free.