2017 was a year unlike any other. For a lot of people, it was scary, stressful, and a struggle to get through. But that’s not all it was.

I may not have ended my year with a signed agent, but I definitely made some forward progress.

I queried 31 agents, attended 2 writing conventions (including my 1st trip to Europe!), finished my second novel, wrote a third novel, and revised my first novel twice, (then edited it twice, cause you kinda got to after revising). I even got an R&R (Revise and resubmit) request from one agent!

Between Balticon and WorldCon: Helsinki, I hit 29 panels, 6 workshops, 2 presentations, 2 book launches, and 2 autograph signings. (Despite mostly having to queue up an hour before each Worldcon panel!) Plus, I met up with/made 3, no, 4 new writing friends in person. 🙂 And that doesn’t include the dozens of new friends I chat with weekly.

That all sounds pretty impressive! But, let’s look at the numbers.

I made sure to set SMART (specific, measurable, achievable, results-focused, and time-bound) goals.

By January 12th of last year, I was already starting to slip. But I didn’t give up.

Here are my admittedly mediocre results.

☑ Edit my first novel with editor
☑ Finish rough draft of my second novel  [minimum 5k a week until done] – Knocked this out quickly!

☑ Plan my third novel – I did!
☑ NaNoWriMo my third novel [writing 50-75k words] – I finished the rough draft at just over 51k.
☑ Revise my first novel or my second novel as needed
☑ Keep querying? or R&R if requested? – Had FEEDBACK from a reject letter about my opening chapter, with what I believe was a R&R, so I worked on that.

■ Post 1 book review on Amazon/GoodReads – Fell short. Overall, I reviewed 5.5 books (the last review didn’t go up until this year) and ranked 25 books.

■ Submit 3 Queries for both my first novel and picture book- Fell short. Overall though, I queried 31 agents, which was only 5 short of my target. If you ignore that I’m combining totals from both books’s queries…

Morgan, in a blue shirt, scratching her head

Strunk-White’s The Elements of Style

Morgan with goggles, sunglasses, and nothing. Post-LASIK 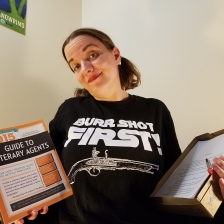 Morgan in a “Burr Shot First” shirt, holding a book on “The Guide To Literary Agents” and the print-out of her latest draft shrugging and wondering if she should query again.

Morgan holding up her stamped passport at 5am in Iceland 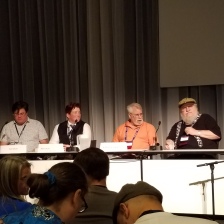 Morgan in a red top, showing the crowd at George RR Martin’s panel

A copper dragon model faces down a tiny plastic knight, in front of a 3d wooden castle puzzle 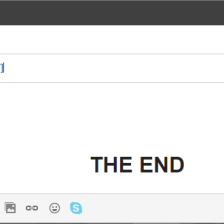 Word Document with the words: “The End” on it.

Posted towards the end of 2016, this post only had 53 views that year, but it became a sleeper hit and is now the main reason people who aren’t already following me find my blog. In 2017, it had 1,092 views!

In fact, I submitted an edited version of that blog post to the “Insecure Writers Group” for their essay anthology and it was selected! Becoming the first essay in the anthology and my first published work. (Free on Kindle!)

Tumblr Logo. A white lower-case serif-font letter ‘t’ in the center of a black rounded square

Instagram Logo. A rounded black square border, with a black circle inside and black dot in the upper right on a white background. Evocative of a camera.

Facebook Icon. A white lower-case f on the left-bottom side of a black rounded square

Google plus icon. A black G in a font that makes it almost a circle, with a plus sign after it, on a white background.

I like stats and tracking progress, so here are my numbers for 2017. I tried to be both engaged and engaging, but outside of Facebook, I may have been more of a creator than a consumer of content.

(Click HERE to answer 3 multiple choice questions on what you’d like to see more/less of in this blog!)

First off, I worked on getting more followers for my twitter and FB Page. Then, I started my own Youtube channel! Between all my social media accounts, I added 3,099 followers, with over 2/3rds being twitter followers.

The FB groups I run are where most of my engagement is, though. So, if I want more of my followers on twitter to even see my posts, I should probably post there, and actually reply/retweet people’s posts a little more regularly.

This year I continued to keep my streak of blogging at least once a week. Once I started the vlog, I added to it at a weekly rate as well. My Goodreads stats are a bit deceptive as I added a bunch of books I’d read in years gone past when I created my account last year.

Some thoughts: I don’t see me posting here on the blog more often unless it’s quotes or images, but I should post to Instagram at least once a week. And if I’m going to use Pinterest, it would make sense to make mood boards for all my Works-In-Progress. Both for myself, my beta-readers, and my future fans! 😉 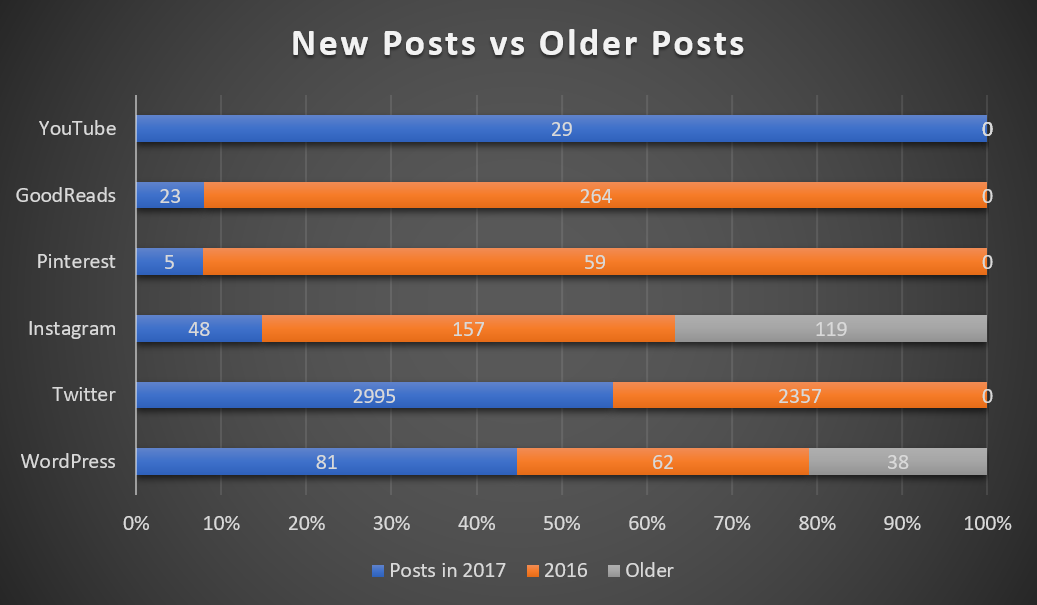 Some of that was external. People who are reading your work out of the kindness of their hearts and working around their own schedules aren’t necessarily going to adhere to your schedule.  (Speaking of… I’ve been sitting on a 2 chapter critique since OCTOBER. Bad Morgan!)

Some of the was consequences of decisions.

And some of it was clear, outright laziness. Binge watching the West Wing and cheesy Christmas Movies. Spending hours staring at facebook…

I DID do a lot of writing, more revising on my first novel than anticipated, started a vlog, critiqued novels for friends and family, and read an average of more than 2 novels/novella’s a month. I queried my first novel on average more than twice a month and my Picture Book 4 times.

I may have fallen short, but you know what Les Brown says about that?

How well did you do on your goals?

Had you given up on them in January, did you rock the BLEEP out of them, or did you do okay but think you might do better with concrete, SMART goals?

Morgan Hazelwood (she/her) is a fantasy novelist who blogs and vlogs writing tips and writerly musings. She likes taking pictures of the sky, reading a good book, and ambiverting from her living room. She's also a voice for the fairy-tale audio drama: Anansi Storytime and its sister podcast: Legendsmith. She's been known to procrati-clean her whole house and alphabetize other people's bookshelves. View all posts by Morgan Hazelwood

As of 8/9/2022, I am part of the Amazon Affiliate program. Buy the books you like and help keep this site ad-free.